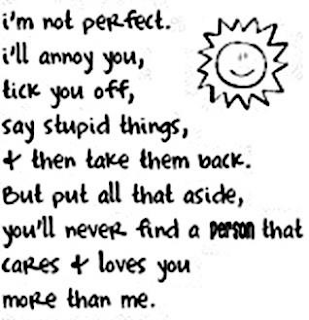 This is an image currently doing the rounds on Facebook. It's supposed to be a cuddly-wuddly warm fuzzy, I think. Well, it should creep you right out.

Human beings are not perfect creatures, no, and some are more flawed than others. Indeed those we love the most are often full of flaws, just as we are ourselves.

However, making excuses for behaving badly, and justifying it by saying "but I love you" is not right. Let's actually examine what this really says.

It says "You MUST forgive me. I demand it. Even though I knowingly and repeatedly treat you badly, and fully expect to do so in future, I demand that you put up with this."

This is the behaviour of what we have come to know as the "vampire". They don't suck blood. They suck your attention, your time, and your good nature. They use subtle forms of emotional blackmail to keep relationships going, because they are selfish, self-absorbed, and irresponsible. But they put a smiley face on it, dress it up as love, and expect everyone to go along with this scam.

Almost everyone has had one of these social leeches at some point in their lives. Due to our upbringings, we have fed these vampires, and you only have to feed them once for them to latch on.

It happens because we want to be nice. We want to be kind, compassionate, caring, and above all polite. Vampires take advantage of us, and if we tire of their bad behaviour, and try to ease them off, they try harder to stay attached. "But I've been a loyal friend! Why would you push me away?"

Some of them are so very subtle that it takes us time to recognize what's happening. Studies have been done, however, and much has been written on the topic. You can find plenty on Google if you suspect you have this type of person in your life, but here's a good read: http://friendship.about.com/od/Friendship_Definitions/g/Emotional-Vampire.htm

Once you realise how these folk operate, it all becomes clear very quickly. You'll soon spot them a mile off. You'll recognize the rinse and repeat cycle of insults and apologies. All you need to fend off vampires is discernment. No garlic necessary.

If a picture paints a thousand words, then we wouldn't bother writing at all. We'd just send each other little pictures. Oh no, wait, that's Facebook.

When I was a child, after each birthday and Christmas, my mother used to sit me down with a writing pad (remember those?) and make me write thank-you letters to all those kind souls who had sent me gifts. It was like pulling teeth. I would get as far as "Thank you for my...." and dry up. She would urge me to flesh it out a bit, perhaps with news of what I had been doing lately, how I was getting on at school, and so on. I hated it. Yes, I was grateful for their thoughtfulness and generosity, and I generally loved what I had been given, but I was sure it really wasn't worth it, because it led to writing all these damn letters.

What was so hard about it? It was just a few lines.

At school my teachers despaired of me. The consensus was that I had a special skill, an ability with written English that was years ahead of my peers, and an actual talent with words that only a few had naturally. Couldn't be taught, but could be encouraged. The problem being the effort required to actually extract it from me. My output, therefore, was always the bare minimum.

At home, in private, it was a completely different matter. In my own time I wrote endlessly, and when one rather more enlightened teacher heard about this, she suggested that in class I could write on whatever interested me. She still didn't get very much, because that demand for this much writing by this date, just turned me right off.

Nothing has ever changed. As soon as a requirement or a deadline appears on the horizon, my muse, already fickle, goes into hiding. On a few rare occasions she has been dragged back out, kicking and screaming, and told to sit there and damn well produce something. Generally though, she is a very flighty creature. She comes when she comes.

After years of procrastination, I have accepted this, and even see a benefit. Apart from the very best writers out there, most people write rubbish when forced. Those who accept writing challenges from their peers or from various groups they belong to, rarely come up with anything actually worthwhile. Those who do, would have done so anyway.

The fact of the matter is that some write better than others. We all have different skills, and some have a talent for playing the violin. Nobody expects just anyone to be able to pick it up and become proficient, no matter how hard they try. You can teach the basic set of skills required, but to actually get music out of it that is a pleasure to listen to takes far more.

This is why I don't get involved in writing groups, competitions, or even just commenting on creative writing on blogs. I do mine, you do yours, and somebody else can be the critic. All of that is more about ego than writing anyway. I am told that even simple blogs are often agonized over by the writers, and are not just brain dumps like mine. Each to their own, but I prefer to save my serious writing for something potentially profitable.

We are all different, that's the thing, and none of it is wrong. We all write for different reasons, different needs. There's no right or wrong way to do it, just preference, and just as I can't hold a tune in a bucket but still enjoy singing, there is no reason why bad writers shouldn't write. Just so long as I don't have to read it.
Posted by Melanie Boxall at 05:20 1 comment: